Interpretation of TWAS and its vulnerabilities

The recent pre-print of (Wainberg et al. 2017) examined the TWAS approach for prioritizing target genes in GWAS studies. The work has relevance to a broad class of methods for “post-GWAS” analysis and spurred interesting discussions. As an author of one of these methods (Gusev et al. 2016), I thought it would be useful to talk about what TWAS is doing; why; and how it fits into our current understanding of complex traits.

UPDATE: The authors respond here with thoughtful points and useful additional context. Please read the whole thing, but I specifically want to echo their point that understanding how well TWAS (and other methods) prioritize causal genes is a critical question right now. I think one way to move toward an answer is by establishing clear metrics for what we consider a successful prioritization (ideally metrics that are agnostic of QTL evidence) and systematically evaluating the performance of all commonly used approaches (including manual curation).

TWAS is a test for significant association between the cis component of gene expression and the GWAS trait. It is part of a broad class of approaches that identify relationships between QTL and GWAS to find target genes. These approaches have many applications: risk prediction; pathway enrichment; causal inference between traits; drug repurposing; identifying disease-associated epigenetic features; and gene prioritization. In their pre-print, WEA explore the application of TWAS to causal gene prioritization in a GWAS of Crohn’s disease and LDL cholesterol. First, they observe loci where TWAS identifies an association at the presumed causal gene, but also at other genes. Second, they switch to less appropriate tissues and find that TWAS often no longer observes an association for the presumed causal gene but observes associations to other genes. They conclude that the approach is therefore “invalid” for finding causal genes. This conclusion is driven by a misinterpretation of TWAS as a causal inference test rather than a test for association. Subsequent claims of “vulnerability”, “false discovery”, and “instability” stem from this misinterpretation. TWAS is neither vulnerable nor invulnerable to discovering non-causal genes because it is not a test for causality. Just as a GWAS study identifies significantly associated non-causal SNPs which need to be fine-mapped, so too a TWAS study will find significantly associated non-causal genes. WEA do not present any cases of false associations, which would be a true vulnerability for TWAS. Although WEA focus on our TWAS/FUSION method because it’s so easy to use [kidding!], they conclude that these vulnerabilities apply to many methods including SMR, PrediXcan, Sherlock, coloc, QTLMatch, eCAVIAR, enloc, RTC – which I’ll generally refer here to as QTL/GWAS methods.

What are QTL/GWAS methods doing?

The goal of these methods is to estimate properties of the genetic relationship between gene expression and GWAS trait. They fall into two broad categories:

To my knowledge, none of these methods claim to perform causal gene discovery (see footnote). Causal inference is challenging. It is especially challenging when you have a single snapshot of the phenotypes you’re interested in and a relatively small number of independent variants. So these approaches estimate support for less stringent gene-disease relationships: how strongly are the variants associated with expression also associated with the trait? what’s the probability that the same causal variants are shared between expression and the trait?

Why do we care about these genes if they are not causal?

While the QTL/GWAS methods do not perform causal inference, we still believe they are useful in prioritizing genes for experimental follow-up relative to other GWAS approaches. This is challenging to quantify because there are so few known examples of true-positive causal genes, and even fewer known examples of true-negatives. One nice aspect of the WEA analysis is that they tried to find such genes in the literature and then asked whether they show up as TWAS hits. In fact, most of the known genes DO came up as significant TWAS associations when evaluated in the expected tissue (though, keep in mind that many of these genes were initially identified precisely because they had eQTLs) and the number of null genes with associations is relatively low (assuming they are all truly null). I would humbly recommend the alternative title “TWAS is actually pretty good at identifying association for causal genes”. [UPDATE: The authors point out in their response that they only evaluated those genes that were TWAS associations and therefore did not assess sensitivity]. That said, there are now multiple examples in the literature that these methods are doing something useful:

When does TWAS have more power than GWAS?

A lot of the work we did in (Gusev et al. 2016) was about understanding when the TWAS model does and does not increase power to identify new associations (again, the focus was on discovery and not fine-mapping the causal gene). So to summarize:

We specifically showed that “novel” genes identified by a TWAS of lipids (genes that did not overlap genome-wide significant SNPs) replicated better in a larger lipid GWAS study than non-TWAS loci at the same level of significance. We again demonstrated this for the educational attainment phenotype in (Mancuso et al. 2017) where 4 out of 4 “novel” TWAS genes found in an early GWAS had genome-wide significant SNPs in a larger, more recent GWAS. I like this result a lot and I think it’s a gold-standard for showing that an association method improves power in real data. But I didn’t include it in the above list because it could still be consistent with non-causal TWAS associations (if, for example, eQTLs and causal variants tend to colocalize for uninteresting reasons such as proximity to promoters/enhancers, high minor allele frequency, high LD, etc).

In hindsight I think we focused a bit too much on novel locus discovery given the many other cool things people are now doing with TWAS, but there continue to be instances where TWAS yields target genes that GWAS cannot find (Gao et al. 2017; Hoffman et al. 2017).

Can we get closer to causality?

Language aside, WEA are correct to point out that TWAS can identify genes that do not appear to be causal in instances where GWAS SNPs regulate multiple genes. As with GWAS, this motivates fine-mapping methods that probabilistically reduce the list of putative target genes without losing the causal gene. WEA are pessimistic about this research direction: “Is it possible, despite the limitations of TWAS, to somehow perform statistical fine-mapping and determine the causal gene or genes? We believe that it is not, even in principle.” But I disagree: if the genetically driven causal expression effect is observed in the tested reference panel then it will have a genetic association with the disease and (in principle) be identifiable by TWAS. Together with my colleague Nick Mancuso, we recently presented such a fine-mapping approach, which identifies credible sets of genes that contain the causal gene at pre-defined level (e.g. 90%), and others are working on similar ideas. As in GWAS fine-mapping, there is an assumption that the causal effect is observed in the study, but the results from WEA in LDL and Crohn’s suggest that this is true enough in real data to be worth investigating.

How important is the right cell-type?

The other observation WEA describe is the phenomenon of “instability”, where TWAS associations are observed in one reference tissue but not in other reference tissues. The meaning of “instability” is fuzzy (well, negatively fuzzy), but such a TWAS association is no more unstable than an eQTL that is significant in some tissues and not others. Indeed, in (Gusev et al. 2016) we showed that genes with significant predictors can differ between studies even in the same tissue (Table S2). We believed that this was primarily due to QC/environmental differences between studies because predictors translated well across studies (Table S3). More recent work by (Liu et al. 2017) using data from GTEx estimated a mean genetic correlation of 0.75 across 11 tissues. In other words, the optimal predictor built in the “wrong” tissue will, on average, have a correlation of 0.75 to the optimal predictor in the right tissue.

An interesting caveat demonstrated in the latest (GTEx Consortium et al. 2017) paper is that disease associated variants are enriched at tissue-specific eQTLs. However, even when we restrict the GTEx genetic correlation analysis to gene sets that are constrained in ExAC/ClinGen or near known GWAS hits, the mean genetic correlation across pairs of tissues remains high (albeit significantly lower than other genes), as shown in this (unpublished) figure across all pairs of GTEx tissues:

While it is important to be reminded of tissue differences, the cross-tissue genetic similarity is high enough to justify using all of the data that is available to us. The amount of genetic sharing is much lower, however, for trans/distal effects on expression, which brings us to a big question:

Does TWAS matter in an omnigenic age?

The recent perspective from (Boyle, Li, and Pritchard 2017) proposed a model of disease where tens-of-thousands of variants have minor (and biologically uninteresting) effects on disease, which cascade through a small set of “core” genes. Recent expression studies have shown that nearly every gene has a cis-eQTL in some tissue, so, optimistically, TWAS can help prioritize the core genes at large-effect GWAS loci.

But let’s imagine an extreme case where core genes are not under cis regulation. Does TWAS provide any benefits? My answer is “No, but wait”. Under this architecture TWAS would identify thousands of cis-regulated non-core genes, which provide no deep biological meaning when interrogated experimentally. This is the premise of futility some folks see in the omnigenic model. But wait! As expression studies increase in size they will have power to predict the full component of expression rather than just cis effects. For core genes, TWAS performed on these genome-wide components will aggregate the thousands of individually miniscule effects that are mediated by non-core genes. These genome-wide associations between expression and trait should be highly significant and robust. With sufficient sample size, causal inference tests across the hundreds/thousands of variants that hit core genes could lend further support to the underlying association.

How practical is genomewide prediction of expression? Let’s do some simple math. Assume a trait with 500k genotyped individuals and SNP-heritability=0.60, 200 core genes and core gene expression SNP-heritability=0.15. Assuming heritability is uniformly distributed across each core gene and a very simple polygenic predictor of expression from (Daetwyler, Villanueva, and Woolliams 2008) we can ask how significant the resulting TWAS association would be as a function of the training size: 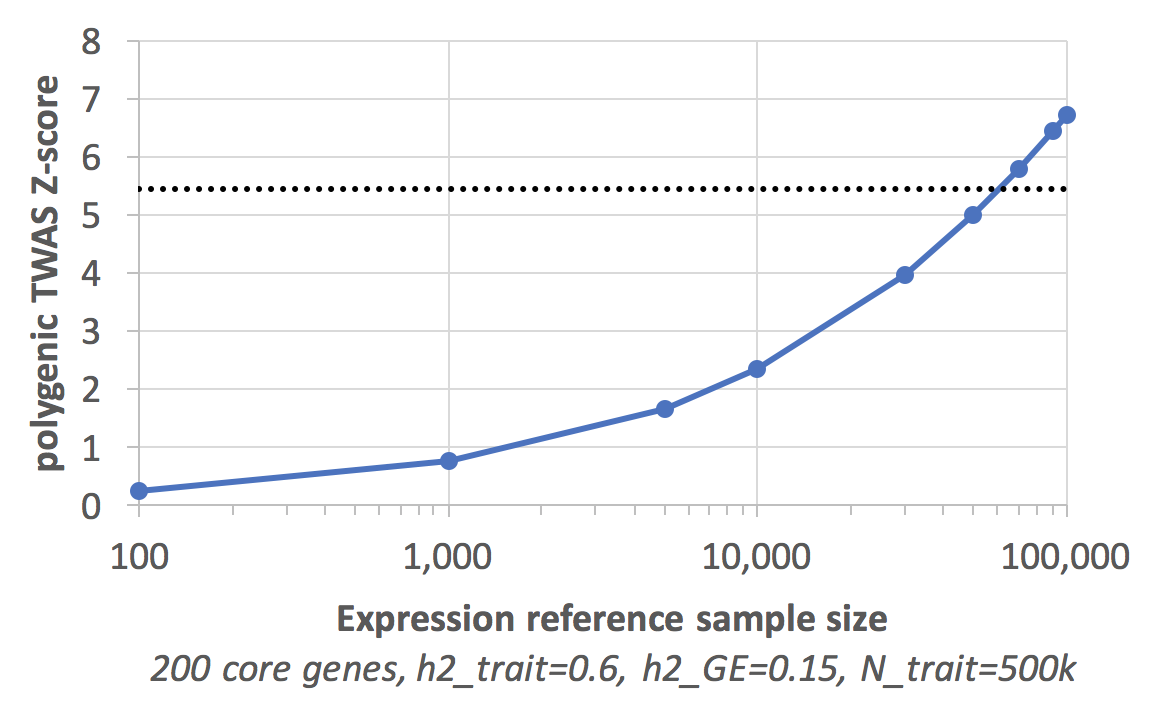 The dashed line is genome-wide significance, which is overkill for this analysis, but even for that cutoff all it takes is 70,000 individuals with measured expression. For comparison, GEO currently contains 1.2M human samples. Multiple studies are gearing up for whole-genome sequencing of 100,000 samples, with costs comparable to transcriptomics. It is, at most, a matter of years before we start to have an answer.

Thanks to Bogdan Pasaniuc for helpful comments